Ferdie and His Garden

A neighbour kindly gave this old newspaper cutting to us a little while ago. Unfortunately my husband did not pay attention to their name so I cannot thank them directly. If you are reading this by some change, thank you! I gave my husband some constructive feedback, he will never make a very good PA. 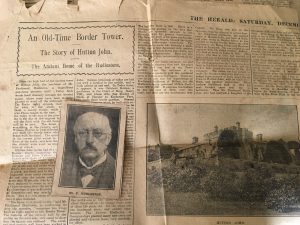 The man in the picture is “Ferdie”, Ferdinand Hudleston. He was the second son of Laura Henritetta and William. He inherited because his elder brother died without male heirs. As the house was entailed, it has to pass to a male heir. He gave up his job as an engineer on the underground in London and came home. He made much of the garden, although his son Nigel removed most of the flower beds, due to the problems and cost of upkeep. Next year we are hoping to restore the lower terrace, part of which you can see in the photo, but not exactly how Ferdie had it, something a bit more modern. He opened the gardens to the public and was often mistaken for one of the gardeners. On one occasion, he happily accepted a coin from a visitor for his hard work! He had scaffolding for cutting the yew trees and he did that himself. The trees are too tall now for scaffolding and require a cherry picker. In fact they have grown so large that they have overrun some of the old paths running along the upper terrace. It’s always interesting to see old photos of the house and gardens; it reminds you that some things have changed and some things stay much the same.